If you are a Buyer

Then you will be taken to a page where at the top there will be a timer showing the remaining time until the Auction, and below the timer, there will be a button for registering in this Auction: 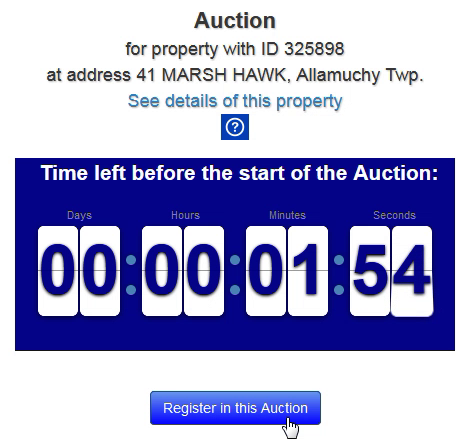 Read the License Agreement, mark in the checkbox that you have read it, and click on the "Register as a Buyer in this Auction" button:

It is advisable to register for a particular Auction in advance. When the Auction approaches, enter the page for that Auction through the Auction table shown above. After the timer expires, the "Goto Auction" button appears: 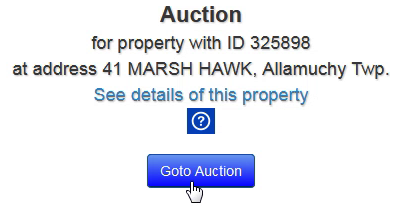 Click on this button. Further, everything will be clear from the following video below, as well as additional tips on the next pages of the Auction:

If there are currently no scheduled Auctions, then instead of the table as in the first screenshot of this help, the "There are no planned Auctions" message will be displayed: 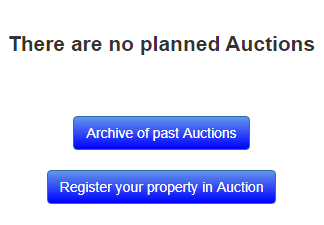 If you are a Seller

Then select the properties that you want to put up for Auction:

If you have only one house for sale, only that one house is displayed:

Then click on the "Add to Auction" button and fill out the following form: 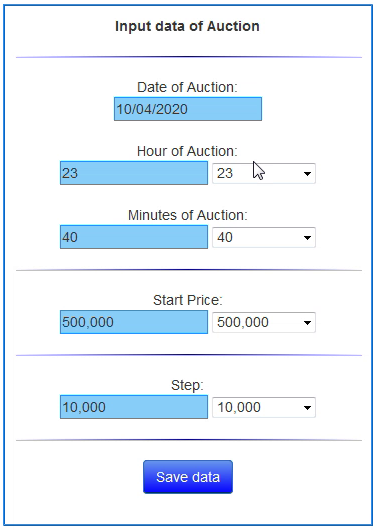 The following video below illustrates the process of the exhibition a property for Auction:

Statistics of past auctions

The following video below illustrates this:

Look at the details of the property using the link in the column "Property details". To go to a specific Auction or view information about it, click on the green arrow ➥ in the "Go" column.

Before registering for the Auction, please read the License Agreement on granting the right to participate as a Seller in an online Auction for the sale of real estate objects registered by the eligible owners on the Website https://greenexpectations.us:

License agreement on granting the right to participate as a Seller in an online Auction for the sale of real estate objects registered by the eligible owners on the Website https://greenexpectations.us

The Organizer in its activities is guided by the State of New Jersey's current legislation and this Agreement. All disputes and disagreements arising during the Auction are resolved by the Auctioneer, whose decision is final.

The Seller may be the eligible owner of the property, who registered it on the Site and put it up for the Auction in full accordance with this License Agreement. Further, in this Agreement, this property is referred to as the "Lot".

The sellers can be capable individuals who have reached 18 and legal entities or their authorized representatives (by power of attorney).

The purpose of the Seller's participation in the Auction is to find the Buyer who has the opportunity to conclude a contract for the sale of the Lot.

1.3. The license agreement on granting the right to participate as a Seller in an online Auction for the sale of real estate objects registered by the eligible owners on the Website https://greenexpectations.us, comes into force from the moment the Seller places his Lot in the Auction and is valid until the conclusion of the purchase agreement - sale of the Lot, or refusal of both the Seller and the winner of the Auction from such a transaction, or until the Lot is removed from the Auction.

2. Procedure for holding the Auction

2.1. The start time of the Auction is determined by the Seller when placing the Lot for the Auction.

The starting price of the Lot is indicated by the Seller when placing the Lot for the Auction.

The step by which the price of the Lot's rises during the Auction is indicated by the Seller when placing the Lot for the Auction.

2.2. The maximum number of steps possible in the Auction is 50.

2.3. Each stage of the Auction consists of a one-minute interval allotted for the expression of the Buyers' consent with the current price of the Lot and a preliminary pause before that. These pauses are 30 seconds, excluding the first pause of two minutes, which must wait for late Buyers.

2.4. Buyers bid by agreeing to the Lot's current price by clicking on the "Confirm this bet" button. This action means the unconditional and irrevocable consent of the auction participant to buy the Lot at the announced price and pay the commission to the Organizer under Clause 2.6. of this Agreement if the Buyer becomes the winner of the Auction.

2.5. The winner of the Auction is the Buyer, who has agreed with the maximum price of the Lot announced during the Auction. If there are several such Buyers, then the Buyer who did it earlier than others is recognized as the winner.

2.6. Action winner will pay 1% fee for up to 100K property price and 0.5% fee for 101K and whatever is winning price. Such payment means that the Buyer acquires the opportunity to conclude a contract for the Lot's sale. In its License Agreement, the Seller undertakes to complete a purchase and sale agreement with the Auction winner.

2.8. Places of Buyers occupied by them in the Auction are determined in descending order of their confirmed bids; in case of an equality of rates, priority is given to the one who confirmed this bid earlier.

The results of the Auction are published immediately after its end on the auction page. They are also available from the Auction's main page by clicking on the "Archive of past Auctions" button.

The Auction results consist of the announcement of its winner and a list of places occupied by all Auction Buyers who have confirmed at least one bid.

An auction on which no bids were made at the first stage is considered complete without a winner.

2.10. The Buyer who won the Auction and paid the commission to the Organizer under Clause 2.6., Then, with the Organizer's mediation or without it, it concludes the Lot purchase and sale agreement with the Seller. The validity of this Agreement is extended until this moment, or until both the Buyer and the Seller refuse from such a transaction.

2.11. The Organizer reserves the right to withdraw any Lots from the Auction at its sole discretion.

2.12. Since potential buyers are registered in a particular Auction based mostly on the data announced about it (for example, the starting price and time of the Auction), it is prohibited to edit the previously exhibited Lots. It is only possible to remove (delete) the Lot from the Auction together with the registration of potential buyers in it. The Seller cannot delete the Lot if the Auction starts in less than 10 minutes. If at least one Buyer and registration in the Auction, also paid for his participation in it, such deletion is also impossible. If the Seller wishes to delete the Lot in this case, he must contact the Organizer, who will independently resolve the issue of refunding such Buyers and delete such Lot. If no buyer has yet paid for participation in the Auction, changing the data on the Lot is possible by deleting the Lot and registering a new Lot with the changed data. In this case, the registration of buyers in the Auction (without paying for participation in it) will be deleted. They will not be misled, which can occur when editing the data about the Lot (without deleting it), when they do not pay attention to the change in the data, and, as a result, they can pay for participation in the Auction, which they are no longer satisfied with after changing the data about it. Therefore, when registering a Lot in the Promotion, the Seller should carefully fill in the data about it. These data are as follows:
1) date and time of the start of the Auction
2) starting price of the Lot
3) the Auction step (in price increments).

3.2. The new version of this Agreement comes into force from the date of its posting by the Organizer on the Site.

3.3. The Seller's consent to the new edition of this Agreement is confirmed by the Seller's further participation in the Auction. Otherwise, the Seller is obliged to withdraw all of his lots from the Auction.

3.4. The date of its last revision is published at the bottom of this Agreement.


You cannot exhibit your property for Auction without consent to the License Agreement.

I agree with the License Agreement for the right to participate as a Seller in the Online Auction for the sale of real estate objects registered by the eligible owners on the Website https://greenexpectations.us

For Investors
Contact Us
Blog
Terms of Use
About us
Feedback
Site Tour
Our Charter
Green Expectations © LLC, 2022
X